As anybody who plays the flute will know, it is very rare for one flute to last you throughout your entire musical career.

Just like with a lot of other musical instruments, as your skills improve you will grow out of the flute you started with, and if you are particularly talented you may find you need to replace your flute in a shorter amount of time.

Today we’re looking at the best flutes for intermediate players. So if you have recently outgrown your beginners level flute, then you are in the right place.

In this guide, we’ve gathered some of the best flutes for intermediate players that money can buy. We’ve also included an additional buyer’s guide and FAQ section which is full of all the information you need to know before you buy a new flute.

With that in mind, let’s take a look at what we have ranked the best flutes for intermediate players on the market.

If you need a new flute in a hurry, and you are of the intermediate skill level, we would recommend buying the Yamaha YFL-222 Flute.

Yamaha is one of the most renowned instrument companies, and this flute definitely lives up to the company’s reputation. We love this flute because it is excellent value for money, and packed with wonderful features, including: 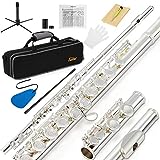 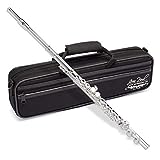 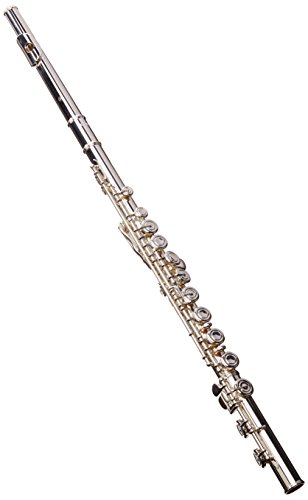 Our favorite flute for intermediate players is the Yamaha YFL-222 Flute. We love this flute because it has lots of wonderful features which make it the perfect choice if you are of an intermediate skill level.

Our favorite thing about this flute is that it comes with a unique foot joint alignment mark. This specific foot joint is perfect for intermediate players as it allows proper playing as your skill level continues to improve.

The other reason we think that this flute is perfect for intermediate players is that it comes with closed-hole keys. This allows you to continue to improve your skill level without the difficulty of open-hole keys.

Additionally, this flute is ergonomically designed to enable comfortable and natural playing at an intermediate level. Finally, we love this flute because it has an incredibly durable design.

It comes with neoprene key bumpers which are stronger than the original cork design. It also has nickel-silver power-forged keys which are built to last.

With all of these wonderful features, it’s sensitive response, and accurate intonation, there is no doubt that this is one of the best flutes for intermediate players than money can currently buy. 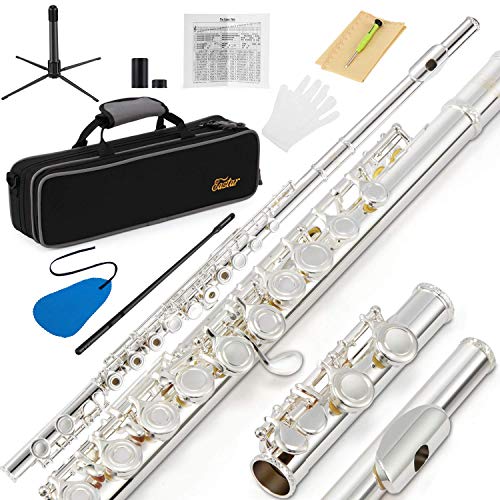 We also loved the Eastar EFL-2 16 Key Flute. This flute is an excellent option as you can choose between a silver or nickel build depending on the material that you prefer.

We would recommend choosing the silver option as this provides the best quality sound, however, the decision is entirely yours. The main reason we love this flute is because it can be played with either open or closed keys, ensuring this flute will last you for a long time.

Additionally, this flute has a first-rate timbre and tone color which enables excellent playing while you improve your skills. This flute also comes with high-quality leather mats and echo panels which improve the durability, tone, and resonance of the sound produced by the flute.

With all of these wonderful features combined with the flute’s excellent quality of build and the fact it comes with lots of additional features, there is no doubt that this is one of the best options available. 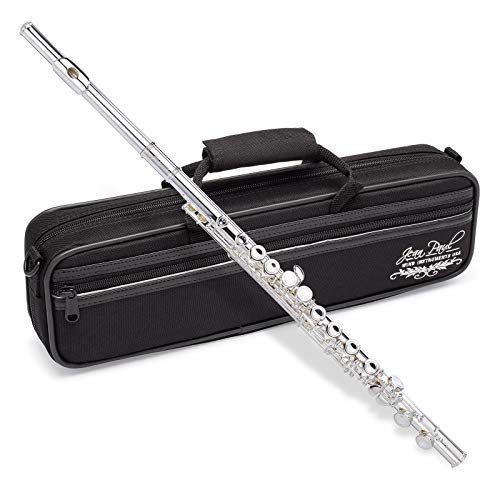 Another excellent option is the Jean Paul FL-430 Intermediate Flute. This flute is better suited to those at the lower end of the intermediate skill level as it is designed with a closed hole key system.

This system allows for an accurate and clean tone while you play the flute. It comes with a C foot joint for a warm and flexible tone, with an offset G configuration for a relaxed and natural feel as your skills improve.

This flute is also a brilliant choice because it comes with lots of extra features to improve your playing. This includes a high-quality carry case that allows you to effortlessly transport the flute between locations.

It also includes a cleaning cloth and rod which ensures you can upkeep the maintenance of the flute, and ensure it lasts for years to come.

With all of these wonderful features and the impressive silver finish of this flute, there is no question that this is one of the best flutes for intermediate players available. 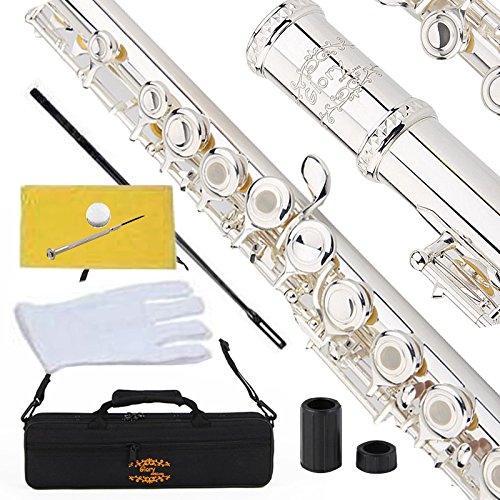 We would also recommend the Glory Silver Plated Intermediate Flute. This flute is excellent value for money as it comes with an incredibly high-quality build and durable design.

It is this design that allows the flute to produce excellent quality sound while you play. As well as this, the flute also comes with a high-grade needle spring which ensures amazing sound quality and a long lifetime thanks to the durable design.

The main thing that we love about this flute is that it can be played even open or closed which allows you to start off playing it with closed keys, before moving onto open keys once you improve.

The flute can be easily converted using the plastic plugs that come with it. Additionally, it comes with a cleaning rod and cleaning cloth for the upkeep of maintenance, and a carry case to safely store it all.

Finally, this flute comes with a leather pad that offers water-resistance and airtightness, which easily makes it one of the best flutes for intermediate players on the market. 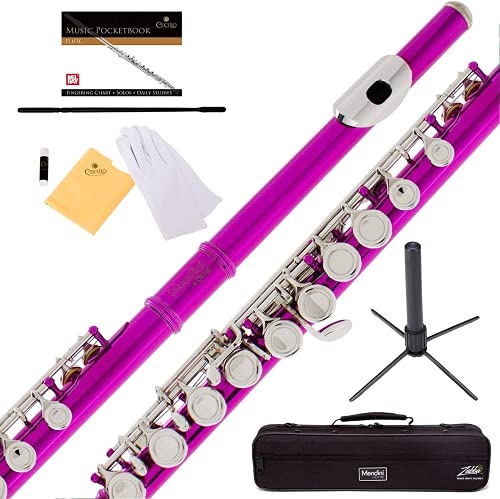 Finally, let’s not forget about the Merdini Closed C Flute with stand. This flute is an excellent choice and is great value for money, however, it is tailored to those at the more advanced end of the “intermediate” playing level.

Our favorite thing about this flute is that it comes in a variety of color options which allows you to choose the one that you like the best.

As well as the flute, this set also comes with a stand and pocketbook which allows you to better understand your flute. The flute itself is a closed-hole C-flute with an offset G key and split E key which produces great sound.

It comes with high-quality double bladder pads and rubber key bumpers, a carry case, and everything you need to keep the flute clean.

With all of these great features considered, it is obvious that this is one of the best flutes for intermediate players available.

If you are an intermediate level flute player and want to buy a new flute, but don’t know which is the best, then you are in the right place.

The flutes that we have looked at above are some of the best options on the market, but if you still aren’t sure we’ve put together this guide.

We’ve put together all the information you need to consider before buying a new flute in this guide so that you will be completely satisfied with the purchase that you make.

So let’s take a look at everything that you need to consider before buying a new flute.

If you are an intermediate level flute player and are looking to buy a new flute, the first thing you need to consider is whether you want to buy a flute with open or closed keys.

You will find intermediate flutes with both closed or open keys because the intermediate skill level is the middle ground between beginner and advanced.

Generally, open key flutes will produce better quality sound, however, they are more difficult to play which is why the majority of flute players will build up their skills before they start using an open key flute.

As well as open/closed key flutes, you might come across some flutes which have both options. These flutes often come with plastic plugs which can be used to convert an open key flute into a closed key flute and are the perfect choice for intermediate flute players.

Another important thing that you will need to consider before you make a purchase is the materials used to create the flute. These materials are not only essential when considering the durability of the flute, but also when thinking about the sound that the flute will produce.

For the best quality of sound, we would recommend buying a flute which is designed with a silver head joint. Ideally, as well as the head joint, you should also buy a flute that has a body entirely constructed of silver as it is capable of producing excellent quality sound.

The only thing with silver flutes is that they tend to be expensive. This can be off-putting if you are an intermediate player as you will likely have to change your flute again once your skill level improves even more.

If you do not want to pay out for a sterling silver flute, alternatively you could buy a flute that is constructed with silver plating.

However, these are still fairly expensive, so if you are on a budget the most important part is the head joint, so as long as this is constructed with plated silver or sterling silver, the flute will produce excellent quality sound.

Size of the Flute

Finally, it is also important that you consider the size of the flute that you are thinking of buying.

The size of the flute has an impact on the type of flute that you are buying, so size is a very important thing to think about.

There are a variety of different types available, from piccolos to bass flutes, which are very different in size. The most appropriate type of flute for an intermediate level player is a concert flute, and these usually measure between 25-27 inches long.

The main thing that impacts the weight of the flute is the material used to build it which is why the weight differs from flute to flute.

That being said, on average all common flutes will weigh between 1 and 1.5 pounds which is a comfortable weight for you to have to hold while you play.

What is a student flute?

If you are an intermediate flute player looking to buy a new flute, you probably will have encountered something known as a student flute before. But it can be difficult to tell the difference as a student flute looks very similar to a normal flute.

The easiest way to tell the difference between a student flute and a regular flute is by looking at the holes.

A student flute will typically have plateau or closed holes on the keys which make the flute easier to play for beginners through to intermediates.

Why is an open hole flute better?

Open hole flutes can do lots of different things, but the main reason they are seen as the “better” option is because they allow the player to achieve different sounds and notes that they would be unable to reach in a closed-hole flute.

Due to this, open hole flutes are often the more advanced flute and the majority of people who are new to playing the flute start with a closed-hole flute.

What does a closed-hole flute mean?

A closed-hole flute is often viewed as the easier flute to play. This type of flute is also often called a plateau flute, and as its name suggests, it consists of a flute that has the holes of the flute filled in.

This means that instead of having to cover the holes in the keys while they play, the user simply has to press down the keys. This is why a lot of beginner to intermediate flute players choose a closed-hole flute as it allows them to build up their skills to a point where they can play an open-hole flute.