The trombone is one of the key instruments in an orchestra or a jazz band, it’s rich tones are achieved through a solid brass composition, the trombone player having to hit the notes with a slide rather than a set of keys.

The trombone is a very powerful instrument that can be adapted for a wide variety of genres from jazz to classic music to reggae. The deep notes that it rasps can give a classical composition a celebratory quality, a jazz band its sleazy, lazy tone and reggae its upbeat rocksteady rhythm.

But such a solid brass instrument can be intimidating to tackle. The weight on this instrument is far heavier than a trumpet. Some newbies might pick up their first trombone and immediately get discouraged at the idea of having to hold and play it for so long. Also, these instruments aren’t cheap, which might be another reason people don’t tackle the trombone.

However, there are plenty of other alternatives out there for people who are interested in the trombone but don’t want to dedicate the calories and money to playing one straight away.

This is where the plastic trombone comes in especially handy. These instruments are very durable and lightweight, the perfect choice for beginner trombone players who don’t want to fork out hundreds of dollars on a brass trombone and want to break themselves in easily to horn instrument playing.

These are great for both student players who are just getting started and seasoned professionals who want a smaller, cheaper alternative to their main instrument to practice on in the house. The sound that a plastic trombone makes is very similar to a professional brass trombone.

Well, budding trombone players won’t have to worry any longer, because we’ve got a list of some of the best plastic trombones available on the market currently. We’ve also compiled a buyer’s guide that will help you the next time you’re shopping for a plastic trombone, as well as some frequently asked questions. 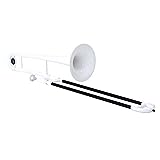 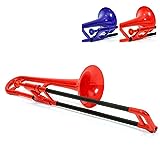 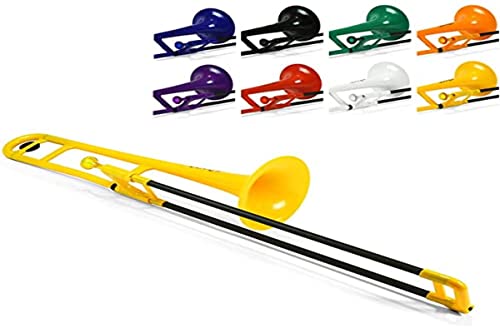 Our first plastic trombone is very popular on the plastic trombone market, with its solid and lightweight design that is extremely easy to maintain and gives a faithful representation of that classic brass trombone sound.

This is perfect for students who want a cheaper alternative to a brass instrument - introducing the pInstrument Plastic pBone Trombone.

The bore of this instrument has been set to .500 and is pitched to a Bb note. The whole unit weighs less than 2 pounds, so if you have mobility issues or just struggle with a full-sized brass trombone, then this is the ideal substitute. This is a great unit to have to build up towards a brass trombone, replicating the sound perfectly.

This trombone has a glass fiber lockable slide, which has a very smooth action, the material of this slide is more durable than that of a brass trombone. This is groundbreaking trombone technology that will surely get the purist’s tongues wagging, but this really is a great starting instrument. 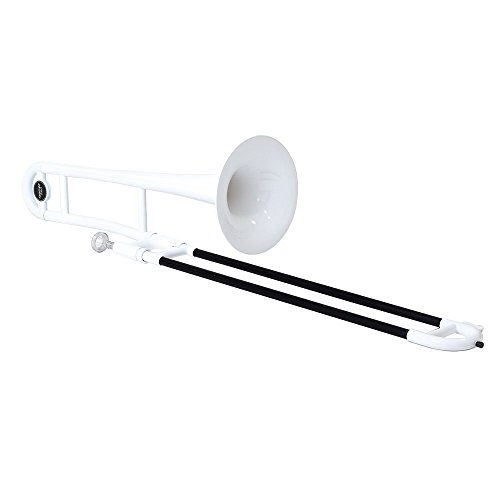 Our next trombone is one that has a high gloss material and composition from highly durable ABS plastic, making it a trombone that is highly reliable, definitely more so than your standard brass instrument.

It has all the high-end features of its brass counterpart too and all at half the price, the perfect option for beginners - introducing the Tromba Plastic Trombone.

Most users will be able to see the sleek and shiny design of this trombone, it looks more like a classic car than a classical instrument! This material is designed to be highly resistant to scratches and damages without sacrificing the overall tone that a lot of jazz and classic players will be accustomed to.

Every note will sound the same as a brass trombone, with features such as a lock ring slide and a double radius crook slide, the design of which supersedes the traditional trombone.

This is lightweight and well-balanced, giving the student player the fundamentals of a trombone without the heaviness, the maintenance and, most importantly, the price. 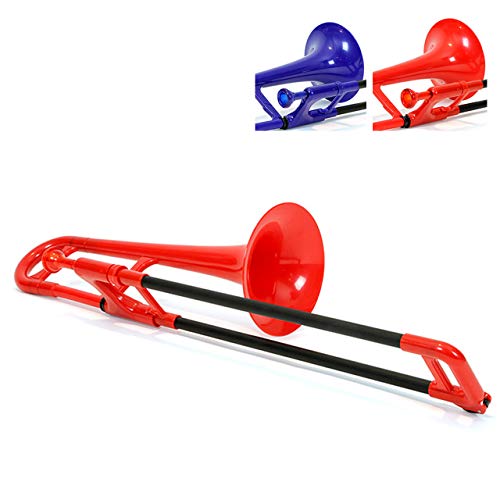 Even though it’s specifically designed for kids, our next plastic trombone is a fully-functioning model, with a glass fiber construction and a fully mobile slide.

This is perfect for young players who want to get to grips with all the fundamentals of trombone playing, it can also withstand all the knocks and bangs you might expect from a younger, less experienced player - introducing the pInstrument Plastic Kids pBone Mini Trombone.

The glass fiber construction of this trombone makes it extra durable, which will be important for the slide component, which is traditionally thin in its construction and often prone to bending and breaking if left unsheathed. Luckily, this has a slide locking mechanism that will prevent it from being left open and further damaged.

This is perfect for smaller stature players who might not be able to support and balance the weight of a full-length trombone. Buying a plastic trombone is a great and cheap method of introducing the trombone to a youngster in a way that isn’t too daunting. This will give them a much better foothold in the complex world of horn playing. 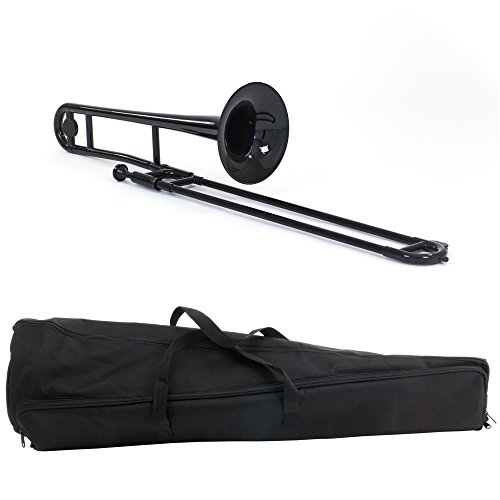 Our next plastic trombone is probably the coolest looking model amongst all our trombones, coming as it does in a shiny black construction, it resembles more a fighter jet than it does a classical instrument.

This is one for trombone players who value looking cool as much as they do playing well - introducing the Estella PTB100BK Bb Plastic Trombone.

The most appealing element of this trombone, especially for newbie players, will be its lightweight construction.

You can balance this one a lot easier on your shoulder, which will allow you to concentrate better on getting the right slide positions. It will make the transition between beginner and intermediate playing a lot easier.

This has a great projection, mimicking that of a full-size brass trombone. You can get an instrument that will a great accompaniment to your classical or jazz sound for half the price.

This will also be a great unit for those players who want to have a plastic backup for their standard brass instrument. 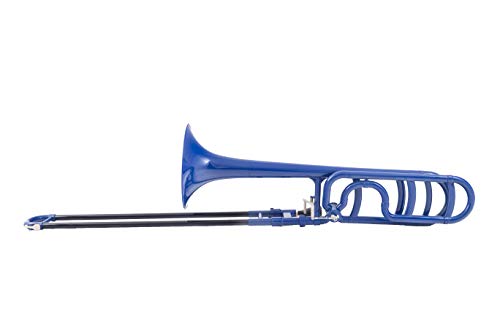 Our final plastic trombone is another with a beautiful solid construction, coming in a tasteful blue color that will make you stand out from the rest of your ensemble.

This has a 5-inch bore and an 8-inch bell, ensuring the same deep and rich resonance as that of a full-size brass instrument - introducing the Kaizer Plastic Trombone.

The weight distribution in this trombone is designed to be extremely well-balanced, perfect for newer players who will struggle to keep a hold of a brass instrument. The slides on this trombone are treated to prevent them from corroding, which will extend their overall shelf-life.

This comes with a 12C mouthpiece that has a more generous cup that will allow beginners to more easily cope with the transition between notes.

The plastic body of the trombone has been specifically designed to withstand high impacts that can damage a brass trombone over time. This will avoid you having to spend more money on unnecessary repairs later on.

Plastic trombones have already gathered an unfair reputation for being less durable and not as great sounding as their brass counterparts.

A lot of this is to do with snobbery from the classical world, where traditional materials and craftsmanship are valued highly. However, there is a world where these two instruments can coexist.

However, there are some features that a plastic trombone will have to have to give you that reliable sound that matches the professionals. Here are a few things you’ll need to watch out for when shopping for your next plastic trombone:

How Solid Is The Construction?

Plastic is known for its affordability, but a lot of people have preconceptions that it isn’t a durable material. Designed in the right thickness, plastic trombones can certainly stand the test of time.

You’ll want something that is a composite of plastic and glass fiber. A lot of the trombones listed above have a glass fiber slide, which actually makes them a lot more resilient than their brass counterparts.

You’ll want to see how many positive reviews your trombone has received. The more glowing ratings, the likelihood is that your trombone will be made from the best materials.

How Well-Made Is Your Trombone?

You’ll want the shape of your trombone to closely resemble a traditional one as much as possible.

If your trombone has a cheap construction, it might be very difficult to play. You don’t want to develop a poor posture or technique to compensate for the lack of balance or smooth motion of your slide.

Ideally, you’ll want a trombone that will last you years, even if it is made of plastic. You’ll also want a model that is easy to clean. One of the main advantages of a plastic trombone is that it’s more resistant to getting corroded by moisture.

What Is The Sound Of Your Plastic Trombone?

Although this instrument is made of plastic, it should resemble the sound of a brass trombone as much as possible.

If you are using it to practice or learn the rudiments of the instrument, you won’t want to commit all your time and effort to learn the wrong notes. Otherwise, when it comes to switching to a brass instrument, you’ll be right back to square one.

Is The Trombone The Hardest Instrument To Play?

Even amongst brass players, the trombone is one of the most difficult instruments to play, mainly because you’ll be using the slide as opposed to the traditional keys. Playing the trombone requires a certain bit of guesswork in the beginning.

A trombone is much more of a test of the player’s ability, with a skilled player having to rely on their instincts a lot more than the guitar player or the trumpeter, who always have frets or keys that they can consult when playing gets a bit tricky or they have a lapse in memory.